Including Thornhill Woods, Dufferin Hill and the Valleys of Thornhill 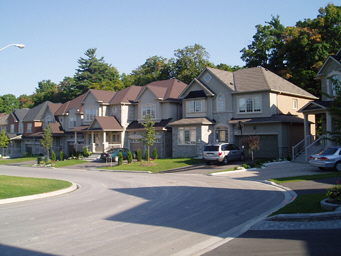 Thornhill (2006 population 106,394) is a community in the Greater Toronto Area of Southern Ontario, Canada, located on the northern border of the city of Toronto. Once a municipal village, Thornhill is now a community and postal designation geographically split into two municipalities along Yonge Street, the city of Vaughan to the west and the town of Markham to the east. According to the 2001 Census, the population of Thornhill-Vaughan was 56,361, and the population of Thornhill-Markham was 47,333.

Thornhill's growth since the 1960s and 1970s has been largely connected to its location bordering what is now the City of Toronto. Large housing developments, particularly beginning in the 1980s with such projects as the Tannenbaum family's Spring Farm area near Bathurst and Clark. Beth Avraham Yoseph of Toronto, a large synagogue named after developer and benefactor Joseph Tannenbaum, is an example of an innovative twist on the "anchor tenant" approach adopted by some residential developers.

Growth has continued apace. For instance, an "uptown" village denoted as Thornhill Town Centre,  is being developed at the corner of Bathurst and Centre Street, forming a continuous line of development north from the Promenade Shopping Centre also near Bathurst and Clark, whose massive parking lot is dotted by an increasing number of condominium buildings and stand-alone retail plazas.

The territory thought to constitute Thornhill has recently begun to expand northward in Thornhill-Vaughan, particularly west of Bathurst, due to the marketing initiatives of residential developers. A new area called "Thornhill Woods" was developed between Highway 7, Rutherford, Bathurst, and Dufferin. Another planned development, "Upper Thornhill Estates", extends well to the north of Major Mackenzie. In 2008 the City of Vaughan held a groundbreaking ceremony for the North Thornhill Community Centre, a new community centre to serve this population which is slated to open in 2010.

However, it should be noted that the area being labelled as "Upper" or "North" Thornhill is more traditionally part of Maple, another former village converted to a community when the Township of Vaughan was converted to a town. Other developments taking place in these new areas include Eagle Hills/Mackenzie Chase/Thornberry Woods at Dufferin and Major Mackenzie. Coronation and Roxborough is being developed at Upper Bathurst between Rutherford Road and Major Mackenzie. The Vaughan planning area that includes (East Maple), (Thornhill/Maple), (Upper Thornhill/Maple) and (Thornhill Woods) is expected to grow substantially over the next few years. This area is known as the "Carrville District".

Thornhill has been a community for years though the greatest growth has happened over the past 20 years. We have seen this community grow into one of the most sought after areas in the GTA. Thornhill has a mixture of Luxury and Estate properties, townhouses, semis and condominiums. The reason people flock to Thornhill is the well priced homes and close proximity to Toronto. Thornhill is also known for being a wonderful place to raise families with excellent programs from sports to the arts to community.

Thornhill is a community part of both Vaughan and Markham and is known for its strong community roots. If you are looking for a community outside of Toronto but offers everything in raising a family Thornhill is the community for you.

Community Features in Thornhill Woods, Dufferin Hill and The Valleys of Thornhill

This website is operated by a brokerage or salesperson who is a member of The Canadian Real Estate Association.

The listing content on this website is protected by copyright and other laws, and is intended solely for the private, non-commercial use by individuals. Any other reproduction, distribution or use of the content, in whole or in part, is specifically forbidden. The prohibited uses include commercial use, "screen scraping", "database scraping", and any other activity intended to collect, store, reorganize or manipulate data on the pages produced by or displayed on this website.